My experience continues with the experiment on dCity. The account that I started with $10 is now four weeks old, and it had grown by more than 30%.

In the last two my city attracted two Homeless cards, and one Immigrants card, helping my population to grow. Also, with all the money collected in these two weeks, I managed to buy a new card - my first Forest.

The city has now a population of 64, has the popularity level at 38 points, and it generates 54 SIM on daily bases: 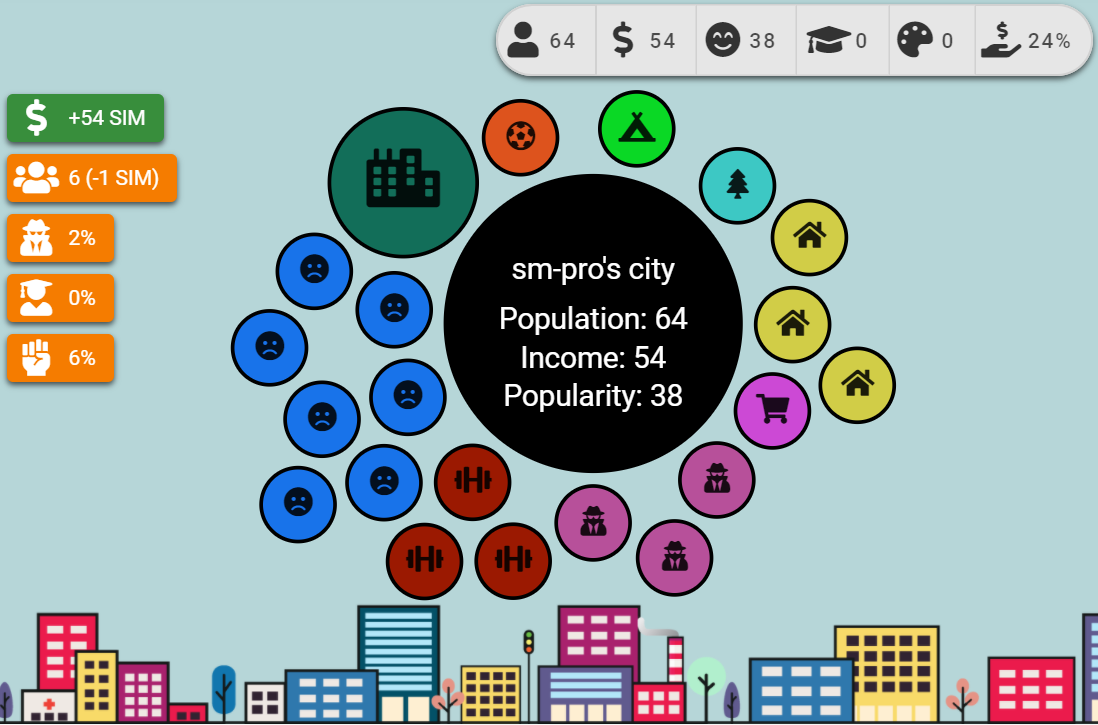 In general, the value of the cards had a slight increase in the last two weeks, but the main growth of this account is organic (driven by the new cards generated and the new Forest that I bought with the earnings of the city): 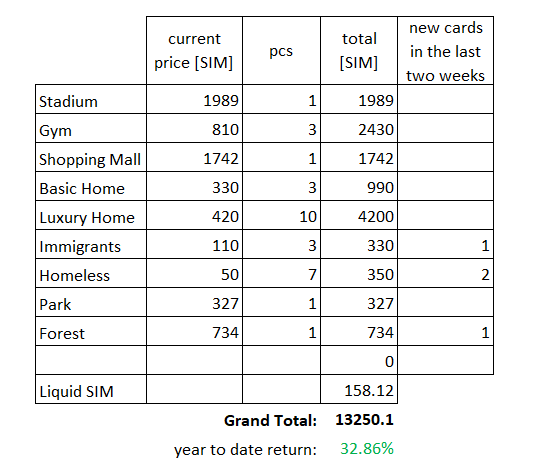 I started to track the history of this account from the very beginning, but also the evolution of the SIM token. So far, this was one of my best investments: the value of the account increased by one third in only four weeks; plus all the fun coming from managing the city. 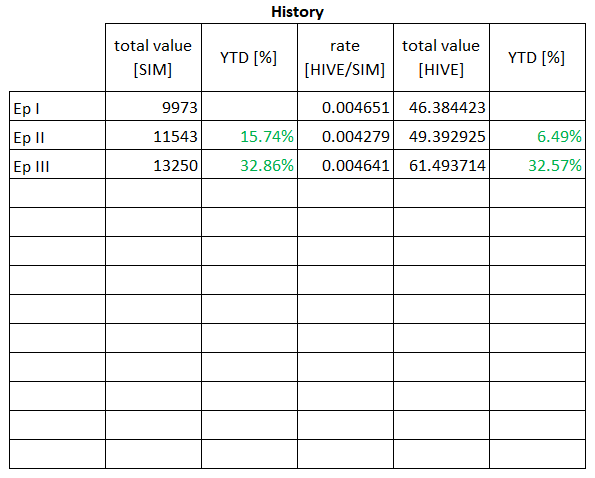 I got a nice suggestion from @theroad2freedom to explain also how I'm selecting the cards that I'm buying, and because I want this posts to be also as a tutorial for new people, I took it very serious, and I will explain you how I decided to buy the Forest.

First of all, let's start from the constrains I had: my city had already an unemployment of 4 people, and I was already spending 1 SIM/day with the social costs, therefore it was mandatory to get a new business card that will make use of these workers. Secondly it was the budget limitation. It was close to the end of the two weeks, and I only had about 800 SIM for my new invest.

There are two sources from where you can buy a card.

For 800 SIM you can buy a random card from the game itself (half of the earnings are used to pay for the development and infrastructure of the game, while the other half is used to reward top players). This is an option that might sound entertaining, but personally I don't think this is good for small account. Why? There are 43 different types of cards that you might get from buying a random one from the game. Some are more powerful, some others not. Also, the game has additional mechanics that I did not explained so far, but not so meaningful for small accounts (training homeless and immigrants into specialists, technology development which affects various aspects of the game, art - with no economic impact of the city and changing only the aesthetics of the game - politics, taxation, wars, production of various cryptocurrencies). Some of the cards are affecting these additional mechanisms, but are useless for the beginning (as an example, a Job Center card increases by 3% your probability to train a specialist, but is not meaningful when you have only two immigrants).

The other source of cards is buying them from other players using the market. There's an marketplace in the game accepting multiple currencies (HIVE, SIM, BEER, DEC, and many other ones), and several independent markets. Personally I'm using the one built into the game, as it has more cards listed. Buying a card from the market gives you the chance of selecting which ones are best suitable for your account, and gives you more options for your strategy.

Each type of card has different attributes. It can increase your population (and therefore affecting the number of workers available in the city), it can generate an daily income (SIM is the currency of the game), it can increase or decrease the popularity of your city (popularity has a major impact on the overall population), and has a number of required workers, and might have other special powers (see above).

Now coming back on how I reached the conclusion that a Forest would be a the best invest, I filtered only the cards that have the "income score" greater than zero (growth of the city is a major objective), and selected only the cards that can fit within my budget. Next, I adapted my formula to include the following: double the impact of the "income score", consider only half of the "popularity score" (no major focus on popularity for the moment, but still important as this is the one influencing the number of Homeless and Immigrants cards attracted by the city), and give a negative impact to the "employment score" (needed to reduce the unemployment).

The Forest was the one with the highest core, and a clear win:

Please let me know your thoughts, and suggestions. Would it be some that you would do very different from this?

Not sure if wise to in first place restrict yourself with the cards (out of budget reasons). Some cards - even if more expensive - could have much better scores. And since you want to grow it could make more sense e.g. to wait and buy 1 restaurant vs. 2 forests.

This is a good observation. Indeed, this has also to be considered, although I would not exchange 2 forests for 1 restaurant. The restaurant needs much more workers (10 workers vs 2x2 workers needed for the two forests), which is very difficult for a small city.

It was just an illustrative example. You would need to do the scoring for yourself, according to what you think makes best sense to you. Also on the Discord channel of dCity you might find special deals of cards sold below the market price which could impact the scoring.

Congratulations @steemmillionaire! You have completed the following achievement on the Hive blockchain and have been rewarded with new badge(s) :

Yeah, for smaller cities cards like Forests, Parks and Gyms are very useful. I'd add an Art Gallery to boost popularity - might even be able to sell a Home to cut costs as popularity boost is significant at the start.

As you mention, some big income cards also need workers which adds another cost to actually receiving that income. That can be forgotten by larger cities trying to decrease social costs.

Thanks for the mention. And thanks for taking my advice. I found your explanation in this post helpful. My city is much smaller than yours (I started out with less investment capital), so I have fewer cards (9) [Population: 11, Income: 12, Popularity: 8], but one of them is a Forest. While I did not include cost of the cards in an equation to determine their value, I did set a limit on the cost and evaluated the population/income/popularity of each card and how it fit with my current unemployment/underemployment. Until I purchased a new Park yesterday, I was able to get everything in balance. Unfortunately, with my daily income at 12, it will be a while before I can purchase another card (unless I find some extra hive/crypto laying around somewhere).

You had mentioned your preference for purchasing cards from the market as opposed to buying a card from the game. As I beginner, I did two things when I started that might be worth mentioning. 1) With the conversion Hive/Sim in a favorable position, I converted my Hive to Sim in order to purchase my initial cards. Each time I am in a position to purchase cards, I will compare to see if it would be cheaper to use Sim or Hive for the purchase. 2) Initially, I did "Buy" three cards for 800 Sim. This was done as an investment option rather than for the cards. In this case, I was able to attain two (of the three) cards that were worth more than the 800 Sim investment and was able to turn around and sell them on the market which enabled me to purchase more of the cheaper cards I wanted. I don't know if this is a good strategy (based on the overall value and availability of each card type), but it seemed to work out for me.

My final though is another question (two actually) - 1) What are some of the other independent markets out there? Is it worthwhile to utilize these other markets (are the prices better)? 2) Are there any other places (like the Discord channel mentioned in one of the comments) that might be a good place to pick up cards. I know there are several Splinterlands players that do giveaways. Are you aware of any opportunities like that with dCity?

Dear @steemmillionaire, i think you deserve more from dcity as you are very addicted to this game, so i think you could be interested to my offer, unfortunately i do not like dcity owner and i won't keep here, so if you are interest, i will put you in the top of the pretenders of my proposal:
https://hive.blog/dcity/@intellihandling/looking-to-sell-my-whole-town-again