Fifteen days ago I started a new city on dCity, with the plan to use it as a showcase for the opportunities given by virtual properties.

I invested $10 in 20 cards, all bought using the market prices. The value of those cards was 9973 SIM, and today I'm presenting a first status report: 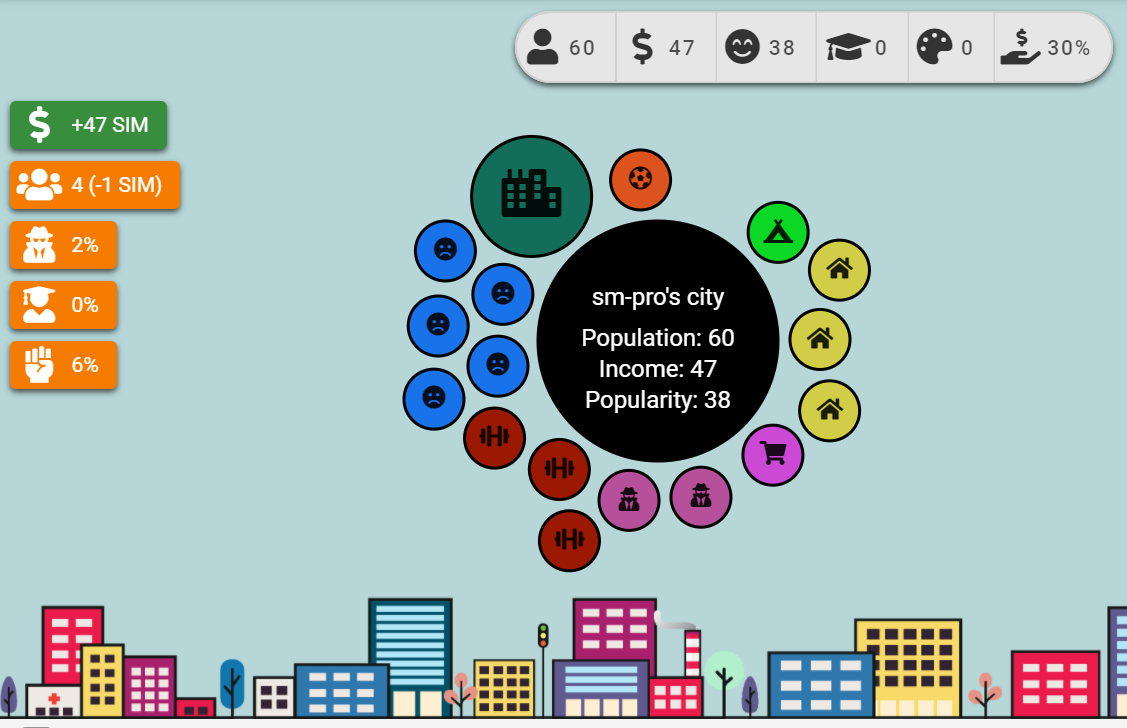 Out of the six new cards, three were bought from the market using the earnings generated in these two weeks (two Homeless cards, and one Park), and the three other cards were Homeless cards that were mined by the city.

Hint: There is a 2%-30% chance based on popularity to receive a Homeless or a Immigrants card, every 2 hours.

I bought the Homeless cards in the very first days, as I needed more workers for the third Gym. The Park was bought yesterday, for a good price, as a preparation for the next production card (a Park does not generate any income, but gives a little bonus on population). 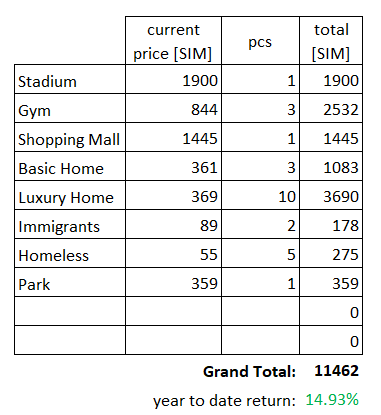 As you can see, the city is currently burning 1 SIM/day with the social cost linked to the unemployment of the four workers. To address this, I will either need to reduce the population, or to create more workplaces (most of the cards requires workers in order to generate income. For example, a Stadium gives an income of 15 SIM/day, and increases the popularity of the city by 10, but it requires 17 workers to keep the business running).

I will put now the two Immigrants cards on the market at a listing price of 200 SIM each. This will decrease my unemployment, and will give me few more days to safe the money needed for a new card that will make use of these immigrants.

See you two weeks with the next status report.

If you have questions or feedback, let us talk in the comment section.

Thank you for this review. I, too, have recently started playing dCity (started about a week ago). However, I have not been quite and aggressive as you. I have spent less than $2.00 in Hive that I had accumulated elsewhere and my current stats are:

I will be watching your progress.

Thanks for stopping by! Actually, with my main account I have about 330 dCity cards. But I had the need to proof that it is still cool (and profitable) to start fresh and without a huge investment. That's why I started this series of posts with my alt-account. I started with $10 because I wanted to also be able to have enough cards to build up a story line, as I hope that more people would find my stories interesting. See you around, @theroad2freedom!

Might I make a suggestion. I know it would be helpful for me to know why you selected the cards you did and what other cards might be a good alternative.

Yes, a very good suggestion! I will cover this in two weeks, in the third episode.