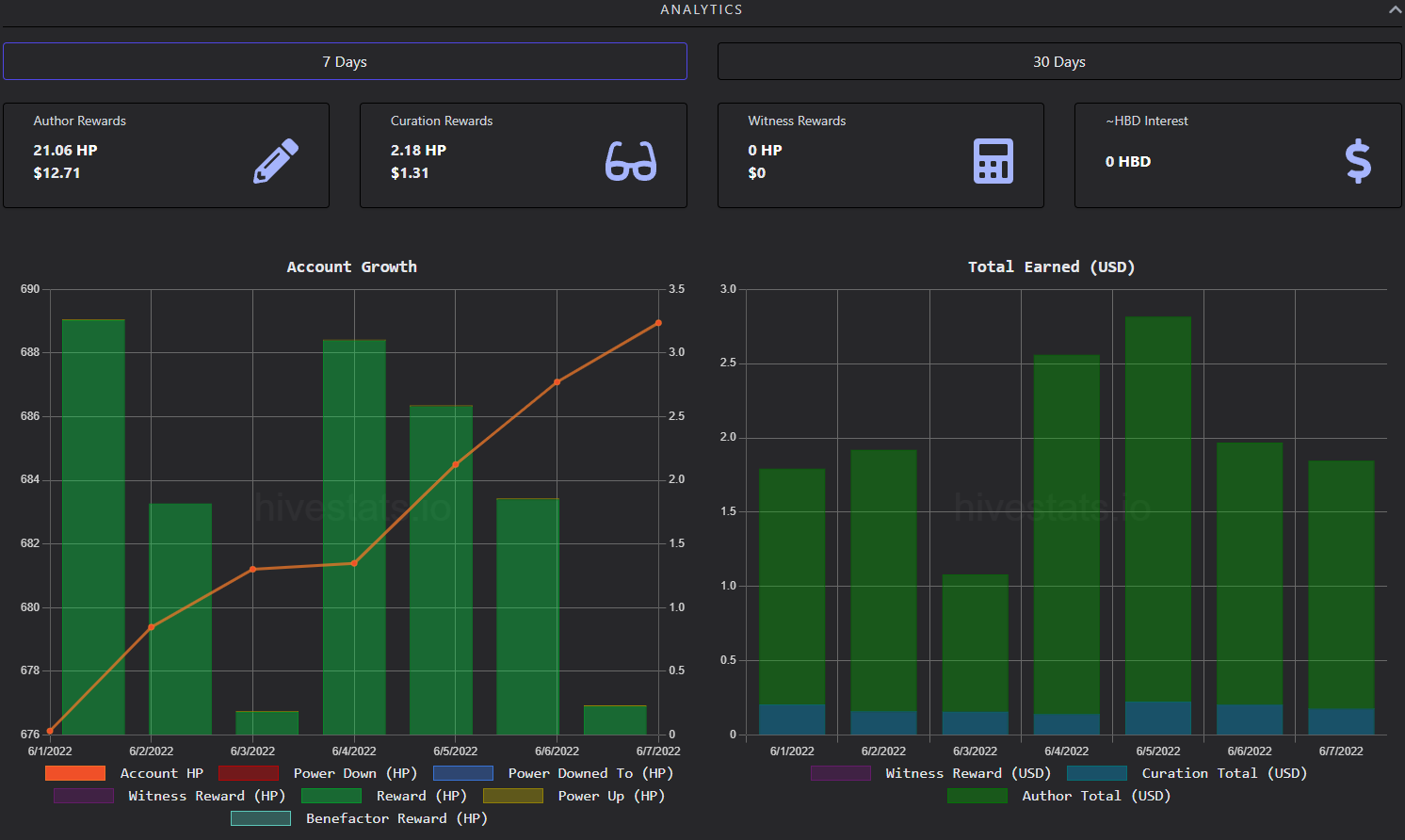 Hello my friends, I hope everyone is doing well this week!

It's been a while again since my last update as-well as general Hive posts, I haven't found enough time to sit down and write recently but hopefully I'll be making a change going forward today to dedicate more time to putting out a few extra piece of content a week again!

Regardless of my lack of Hive-ing I've still found myself growing at a steady pace!

Of course my Author rewards are down due to less writing minus my daily Rising Star giveaway posts but still beautiful progress! I'm hoping to close the gap between myself currently and 1000HP

I'm not too far off now, with some effort into delving into new communities and writing more hopefully I could see that gap close even faster. 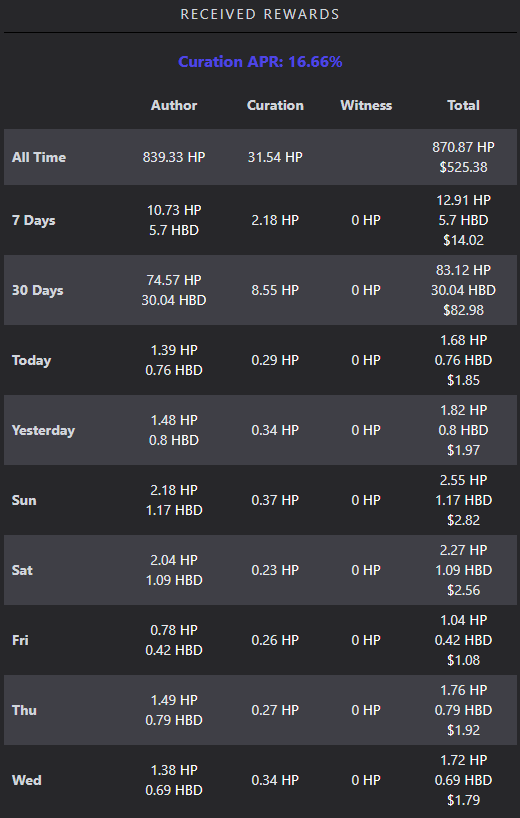 Curation rewards have been steadily growing over time as you'd expect with an increase in Hive Power but in comparison to how I cast out my votes with some days dishing out votes to every post I comment on and others where I only upvote a specific few for 100% value. It's nice to see it act some-what steady in that regard!

I believe around the 1000HP mark I could see myself earning 0.5+ daily which would be fantastic, of course over time compiling half a hive extra a day from curation alone would see me increase a few hundred a year, amazing

I've been depositing liquid Hive into my savings account to compile it safely and was in the process of compiling my HBD pay-outs also but over time I decided I would withdraw my savings and try trade my HBD for Hive.

When I withdrew the bulk of my savings the market dips had passed and we have been above 0.50$ range since, I ideally would've loved to grab Hive around the 0.40 mark which was my goal and hope but perhaps the boat has sailed! would be great to have Hive for any cheap price but I can't help but feel the market will dip again once day soon and I'd be able to trade up then.

I could be wrong and it could totally pass me by but I'm willing to take that risk, perhaps could profit myself a good handful of extra Hive for being patient.

if the market continues to raise over the next week I could see myself re-deposit my almost 100.00 HBD back into savings just to accrue the 20% interest.

I include my diesel pool liquidity in these holdings for anyone wondering! so some coins may fluctuate a tad more than others. I'll display which pools I'm providing LP for down below!

For not posting much over the last few weeks I've been myself gain some good holdings regardless! which is great to see.

I'm still holding out to enter a pool with my WEED tokens so I'm hoping to steadily gain a decent amount more of them, I need to look into pools again when I have some free time and try find a few worth joining.

I've also added PGM to my token list as it's another tipping token I've very much enjoying right now especially with its perks of distributing a small fraction of Hive game tokens to users! great incentive for our little communities everywhere to jump on board.

I've also found myself playing Splinterlands again so I'm hoping to perhaps get out a few Splinterland related posts in the coming weeks, stack up some more SPT and SPS and get staking!

Not much to note for the pools I'm currently in. no changes in the grand scheme of things, more or less the same as previous weeks just collecting the rewards for providing the liquidity.

Definitely looking to join a few more pools as I have some liquid SWAP.HIVE to my name now, just unsure which pools would be the best I could jump into! the SWAP.HIVE:ONEUP pool has been great for the ONEUP rewards just a shame no other tokens were added to this round of the pool! 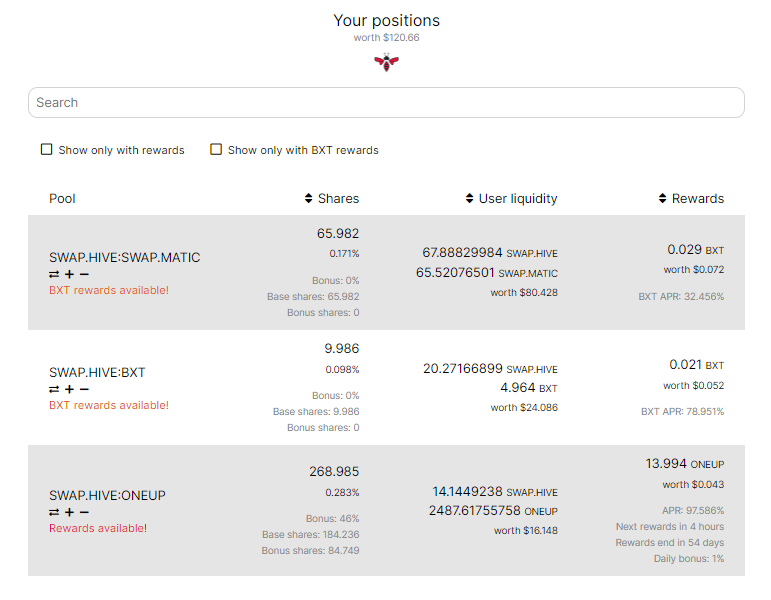 THANK YOU FOR READING!

Still making good progress there - nice ONEUP and LOLZ increases in the week !

Good point about aiming for 1000 HP, I never thought of the curation impact like that (even though its obvious) - thats something well worth shooting for.
!LOLZ

Great growth on Hive, my friend!

Thank you my friend!!
!LUV

Its tough to keep growing but we gonna keep trying i suppose. Also tough to stay positive with looming bearishness. I keep on stackin with ya bro.

Hell yeah, your posts definitely inspire me to try write more out my comfort zone, need to try jump into some other communities then the stacking will just be a benefit of all this dopeness around Hive