@dubble 66
about 1 month ago (Edited)
hivestats 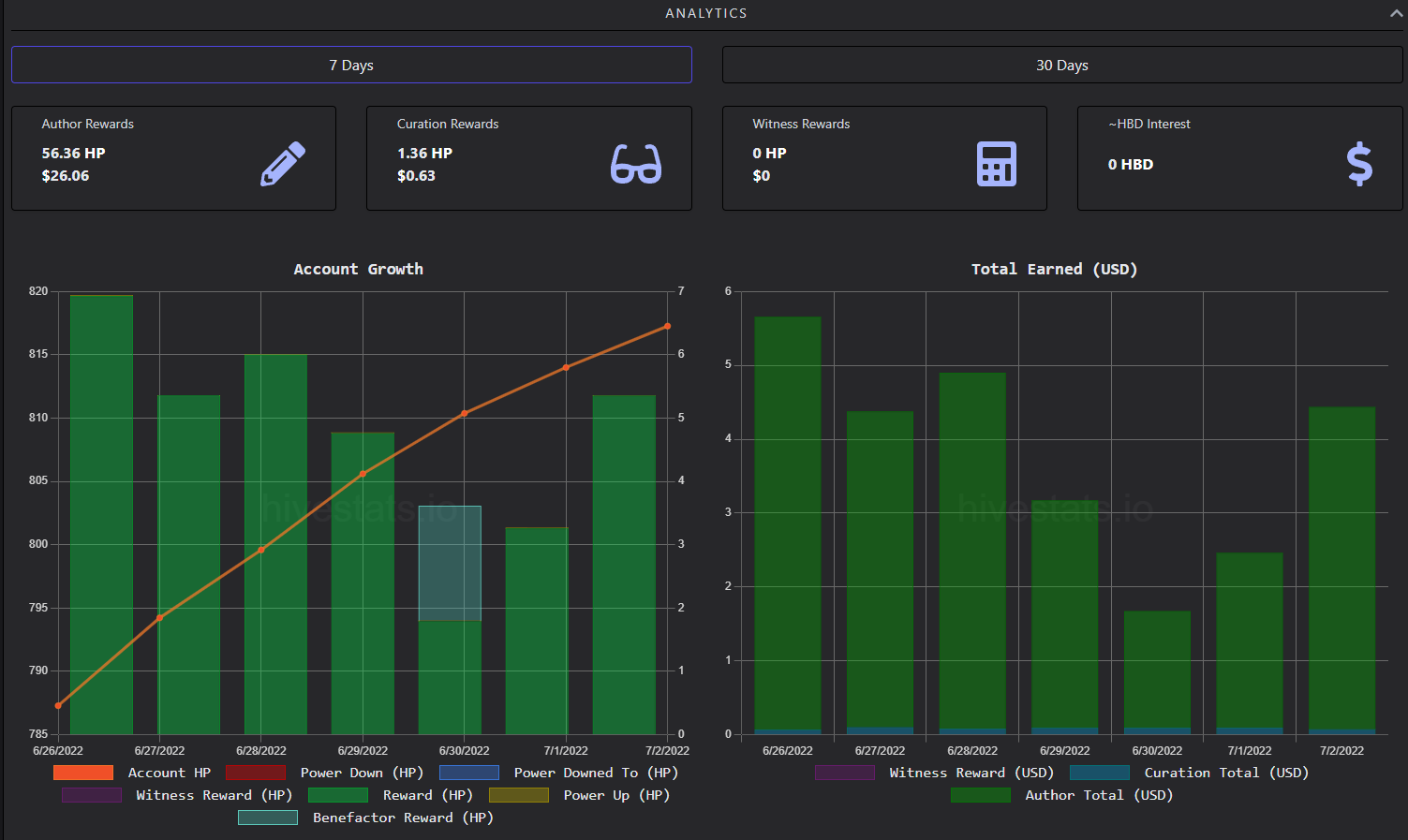 I missed posting my update yesterday on the start of the month as I got side tracked and completely forgot but we've had another great week here on Hive, we're up around +30 HP this week which is great, would definitely be more if I kept my post pay-outs to 100% but for a while its been 50-50 between HP and HBD.

I've been awaiting a moment in the market I can capitalise on Hive, the price has steadily been going down since we saw massive spikes in the price during the week, still higher than when I should've bought instead of questioning myself but oh well! Hopefully I can shift this HBD into Hive soon sub 0.40 mark

on the curation side I've seen more or less the same returns as previous weeks. I'm hoping once I push higher towards the 1,000HP mark I will see myself averaging more towards the 0.3 range. 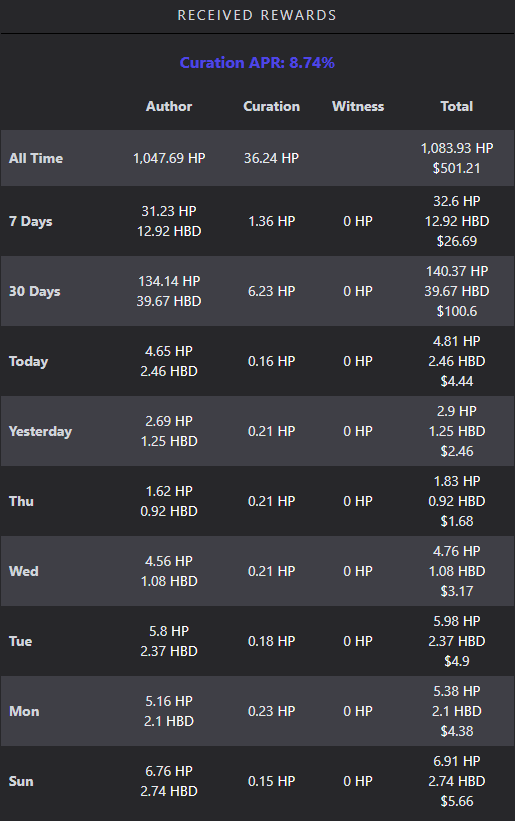 I include my diesel pool liquidity in these holdings for anyone wondering! so some coins may fluctuate a tad more than others.

I've been trying to stack as much DEC as I can from spare tokens while the SPS airdrop is coming to an end, I'm pushing around 3+ SPS a day, not much in terms of earnings but I have a hope the token will increase in value when more use-cases come into Splinterlands, so I'm aiming to hit at least 1,000 eventually. Might have to put some market buys in while its 5 cent each.

Almost close to 10,000 total ONEUP also! Big milestones, not sure what to do still with my liquid ONEUP, ideally was waiting for a good liquidity pool to join but I haven't seen much to interest me recently so until then I'm just stacking it.

PGM is a great tipping token, I find its function to be quite nice. Stacking small amounts of other tokens for games here on Hive, with more games building hopefully we can see PGM dish out a tonne of tokens each command one day. - I'm aiming to push to 500.00 PGM through commenters on my posts/author rewards, 62 increase this week is quite a healthy amount, still a while off 500 but the more I stake the easier it should become!

Thats some impressive numbers. I am trying to stack as much DEC as possible and love !PGM too!

Keep up the great work!

Thank you my friend! Hopefully the DEC stacking will pay off for us players in the long-term when some newer mechanics are introduced like plots finally and more SPS use-cases 😂

Have a good one bro!

@luvshares 57
about 1 month ago

Lots of impressive stats, and thanks for sharing some insights on your strategies.
A !LOL for your collection

Thank you my friend! Hope you been having a great weekend!

@hivebuzz 71
about 1 month ago

Congratulations @dubble! You have completed the following achievement on the Hive blockchain and have been rewarded with new badge(s):

Nice brotha. Beast beastin. Lets keep stackin, definitely seems like good time to accumulate. Would suck to see a worse drop from here. Hive on the whole, still holds a decent chart in my opinion. To see like .20 again would suck though.

For sure, can't see it dipping too steep anymore especially after those market jumps the last couple of weeks I think it definitely would've put more eyes onto Hive at least due to everything being red except us being up 40% during them days lmao

I think I'd definitely do a big buy order around 0.40 mark, everyone seems to be calling the BTC bottom but with how the market is with all the corrections + liquidations, we just gotta hope they're correct this time round then we can start climbin' again


What do you say when a Southern person stabs you in the back?
Betray'all!
Credit: reddit
@captainquack22, I sent you an $LOLZ on behalf of @dubble
Did you know that $LOLZ is a Dividend Token too? Find out more at LOLZ Defi.
(2/10)
0
0
0.000
Reply

Hey Dubble, Thats an impressive weekly income you have going there - great to see ! keep it going !
!PIZZA

@pizzabot 55
about 1 month ago
PIZZA!