The Day Police Caught Someone With Weed Right in Front of Me.

@driplord 53
about 1 year ago
Proof of Brain 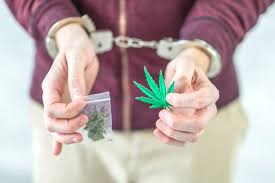 Wanna know what happened and how it happened on that day?

Then chill, relax and take a short ride with me on this post. 😊😎

It was really a very long, stunning and annoying day and you know those kind of days, you will never expect such to happen and you will never see it coming. That's the life we live in, things just happen for no fucking reason.

So on this day, this was about a year and two months ago, I wasn't back on hive by then, if not I probably would have written this down a long time ago or probably even on that day it happened or latest the next day.

I took a taxi headed to somewhere in town in the City i live in,while on the way there was a police check point and the police men on duty at the check point stopped the taxi that I was in and that's what they do when ever they are out there, they stop every car passing and conduct a search to see if they will find any one guilty of either possessing hard drugs or even a pistol.

So when they stopped the car I was in, they ordered everyone inside the car to come out and we came out and each of us was searched from head to toe, one by one and nothing was found. Then one of the cops personally entered into the car and was still searching and then he came out with a wrap of weed in his hands and called for the driver and asked him who kept the bag of weed inside the car? 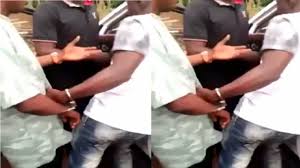 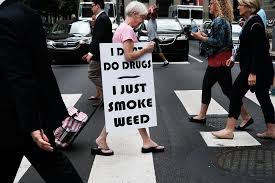 Something inside of me kept telling me to tell those cops that, they should let us go that we haven't done anything wrong, you just found a wrap of weed, we don't do drugs, we only smoke weed in peace. 🤓

But I knew if I said that I maybe arrested and carried away for being the person that kept the weed and I know I might regret saying that. So I kept shut and all of a sudden one woman who was also in the car with us called the attention of one of the cops and was whispering something in his ear, I was curious about what she was telling him.

And then the next thing the cop said was that we should all be freed except for one person and then the cop said the woman just told him that she saw when one person kept the wrap of weed inside the car and that's the person that won't be freed.

I was relieved that I won't be punished for something that I know nothing about and immediately the handcuffs were taken off from all of us except the person that was accused of keeping the wrap of weed.

Pheeeeeew...... What a great sigh of relief I breathed from my mouth and I was free to go and I couldn't help but feel great pity for the person who was not freed of the handcuffs.

But they was nothing I could do for him, or was there? I had to go my way in peace and I felt more cautious from that day that walking around with any weed substance is highly risky.

But before I left I saw them put him inside their vehicle van and told him to pay some money and they will let him go and they also told him to call someone to come pay some money and bail him but he had a better option, he called someone he knew who had a high rank in the police and the police man he called immediately phone called the cops that arrested him and told them to let him go that the person in their custody is his relative and immediately he was released, "the power of knowing someone in high places though." 😎

That was a very good experience for me you know. 😆 Up til now, I have never been caught with any weed and I keep doing my thing and I remain "one of the highest in the room." 😎🤑🌴🗿🛰

Damn. I thought weed was legal globally. What country are you at again? Why would they still have weed illegal?

No, just because it's a harmless drug, doesn't mean it couldn't cause problems. At my job, they acknowledge that it isn't illegal to use it anymore in California, but if they catch it in your blood, you're going to probably lose your job.

Hahahaha. 😂😂 I guess you thought wrong then, I'm at a motherfucking country called Nigeria.

That's a very bad and extreme way to punish someone for using the drug, making someone lose his/her job is just not fair at all. That drug could give more focus and creativity and that could make an individual perform better at his/her job you know...

Thanks for coming around, Big man. 👍🏻🥂

Well, the reason a lot of companies would fire you for smoking weed is because some people might be tempted to use it while they're at work or before coming in to work. A lot of the jobs I do are pretty hazardous.

The U.S. military, for example, use to allow recreational drug use. At least, they didn't restrict it. Then some fighter pilots crashed their jets. Autopsies showed they had drugs in their system when they were flying those fighter jets. After that, the military had zero tolerance use. So, even if you live in a state where weed is legal, if you're in the military there, your out of luck because they'll kick you out if it's in your system.

Alright, Alright, I understand and I get the picture you just painted perfectly well.

I think it's cool though, although the drug is a very euphoric one, people tend to abuse it and attimes are unable to have full consciousness when on the highness of the drugs.

I appreciate the way you took your time to explain and break it down to my understanding, that's dope! 🔥

You're welcome. I used to work at a steel mill and I would see images of fatalities during training sessions. In one instance, I saw a man's body wrapped around a pump shaft. He was just doing routine work when he got too close to the pump and his shirt made contact with the shaft. He lost his balance and in he went. He had no time to respond. It's instances like these that forced some of the industries I was in to resist state laws of legal use. The state won't force those companies either because they know the state would lose.

goddamn it! Lord have mercy. 🤭 That must have been a very horrible sight, seeing a man's body wrapped around a pump shaft ain't no delight at all.

I see your point of view very optimally now, well, what more can I say other than, the drug has it's advantages and disadvantages and that is something to always have in mind before taking a piece of that.

And they are definitely times that saying no to the drug could be the best decision to make. 🤗

I agree. Everything has its own place and time. It up to the person to decide.

It's the duty of every individual to make his/her own decision regardless.

Congratulations @driplord! You have completed the following achievement on the Hive blockchain and have been rewarded with new badge(s) :

Wow, this is terrific.

Thanks for the update, words can't express how good I feel about this.