D-Gusta King Leaves going to the hairdresser | The Defoliation 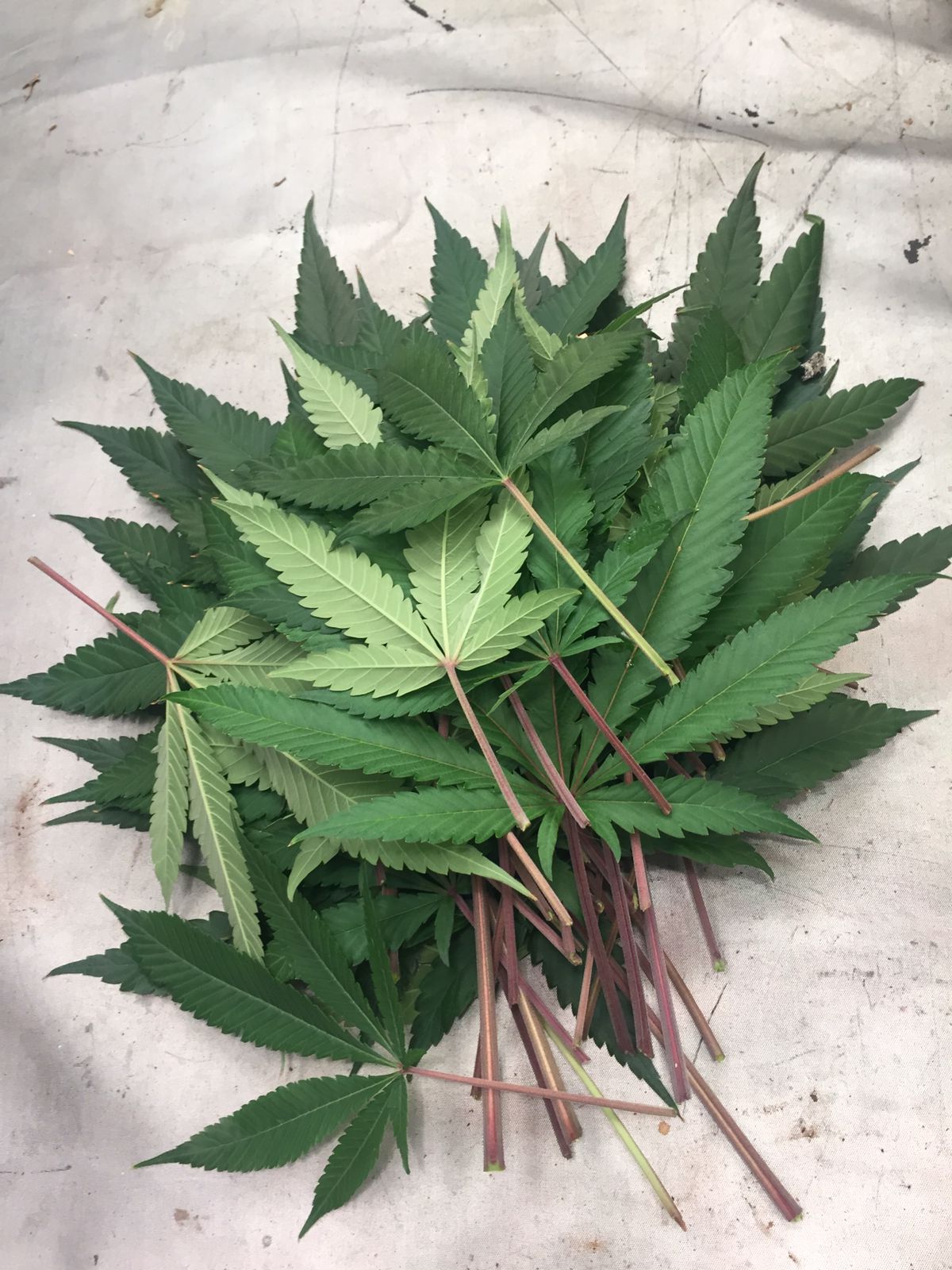 When we talk about defoliation in Cannabis, we are talking about removing leaves and buds that disperse energy from the main buds. The cut will be made in order to balance the plant part with the floral part of the plant.
Pruning and defoliating plants in indoor cultivation is not always simple. 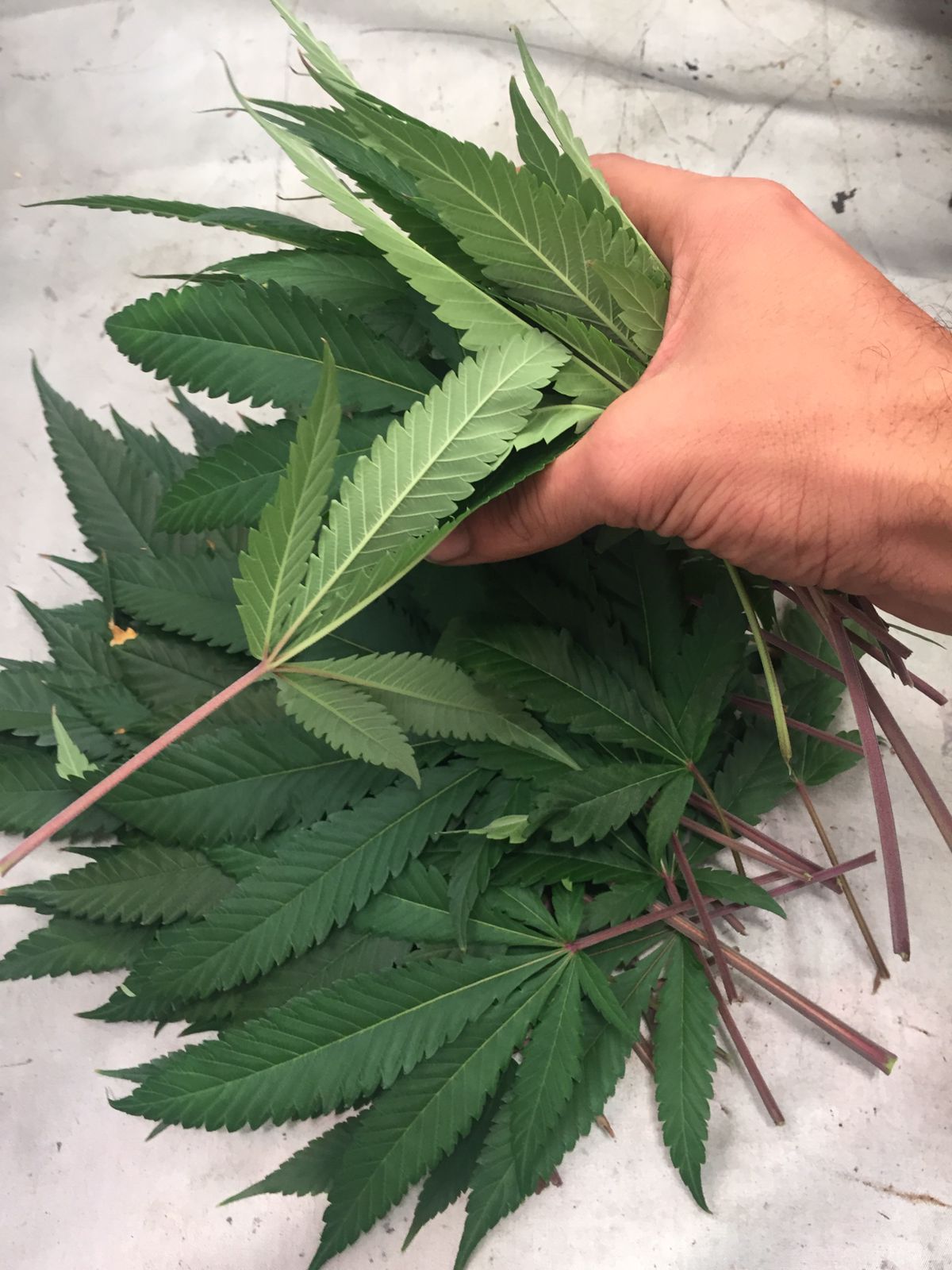 Some of the benefits of a well-done defoliation are:

Greater penetration of light: Light will be able to penetrate deeper into the plant, reaching more buds and causing them to develop more. 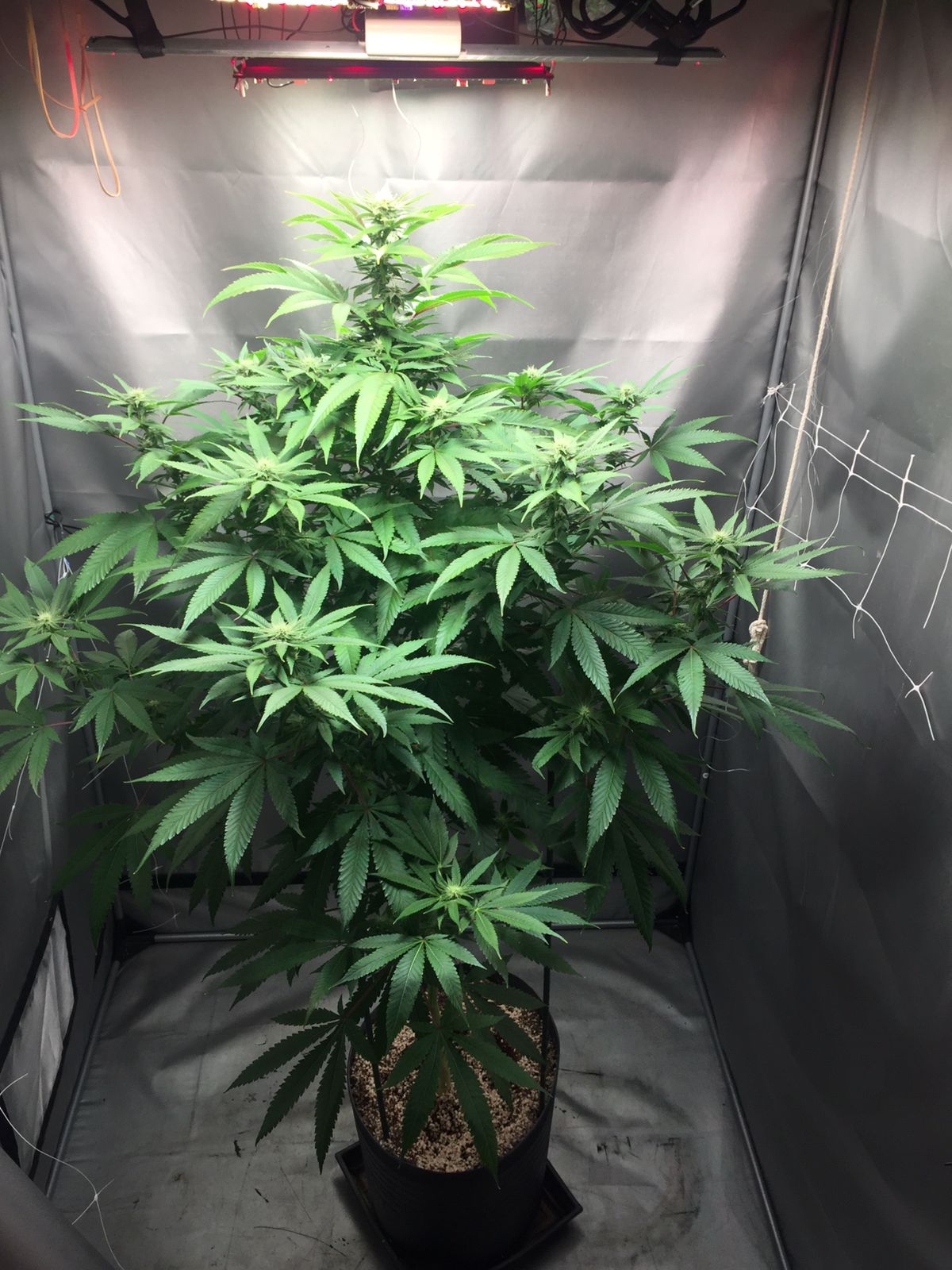 Less leaf density: With less leaf density, light can penetrate more and the wind can circulate better through the buds, preventing pests like mold and insects.

Lower air humidity: With fewer leaves, we will have less water release in the form of vapor, that is, the relative humidity will not rise as much as with many leaves.

Denser flowers: Defoliation can not only reduce the number of leaves, but also buds that rob the plant of energy. These shoots have a low development potential and can be removed so that the main buds are denser, as they are receiving more energy and nutrients (and not sharing with other shoots). 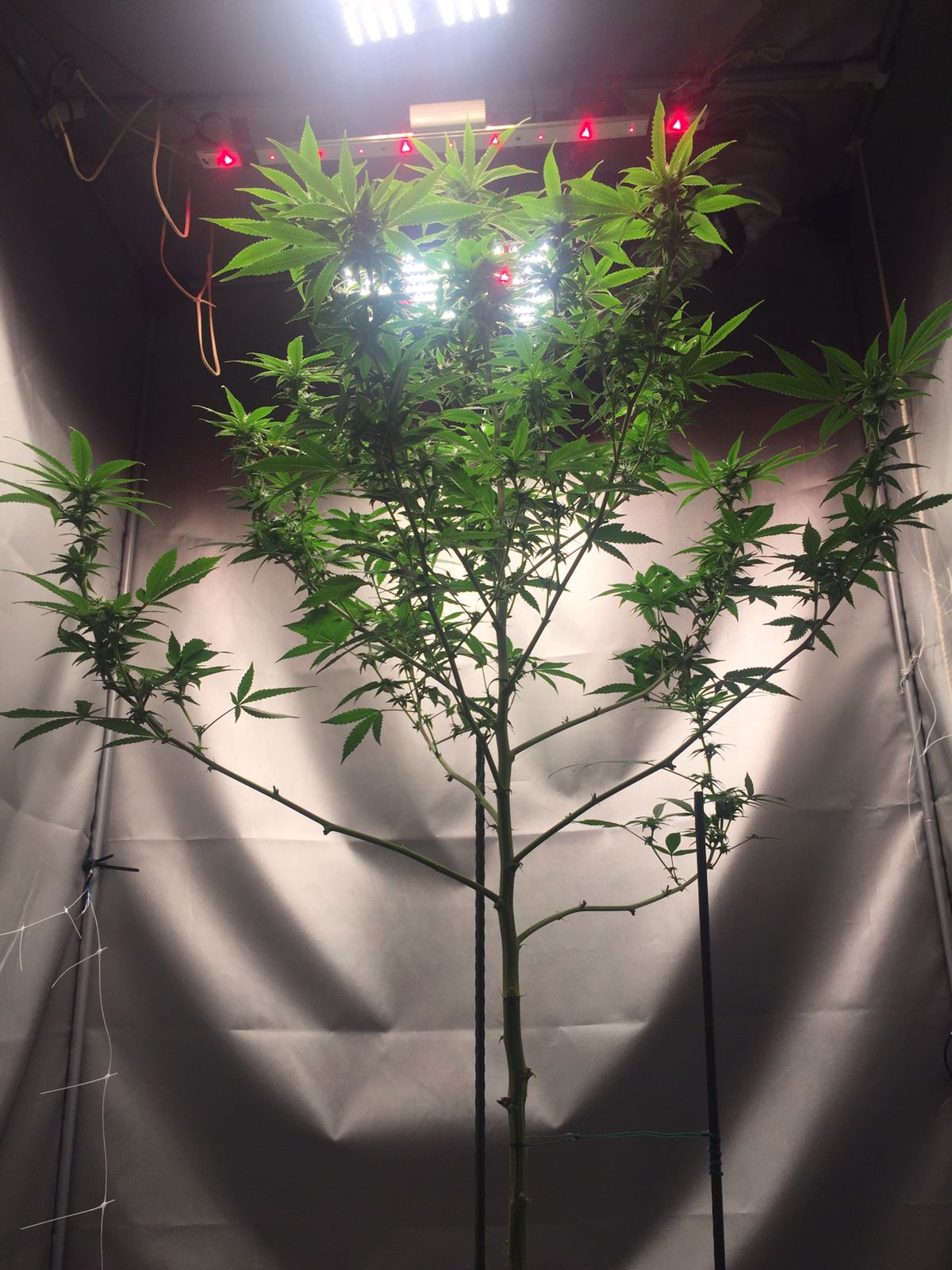 In the vegetative phase, in photoperiod plants, defoliation can be done after the plant starts to grow vigorously, not being a young plant anymore, when the leaves are getting too big or covering other shoots that are about to grow. 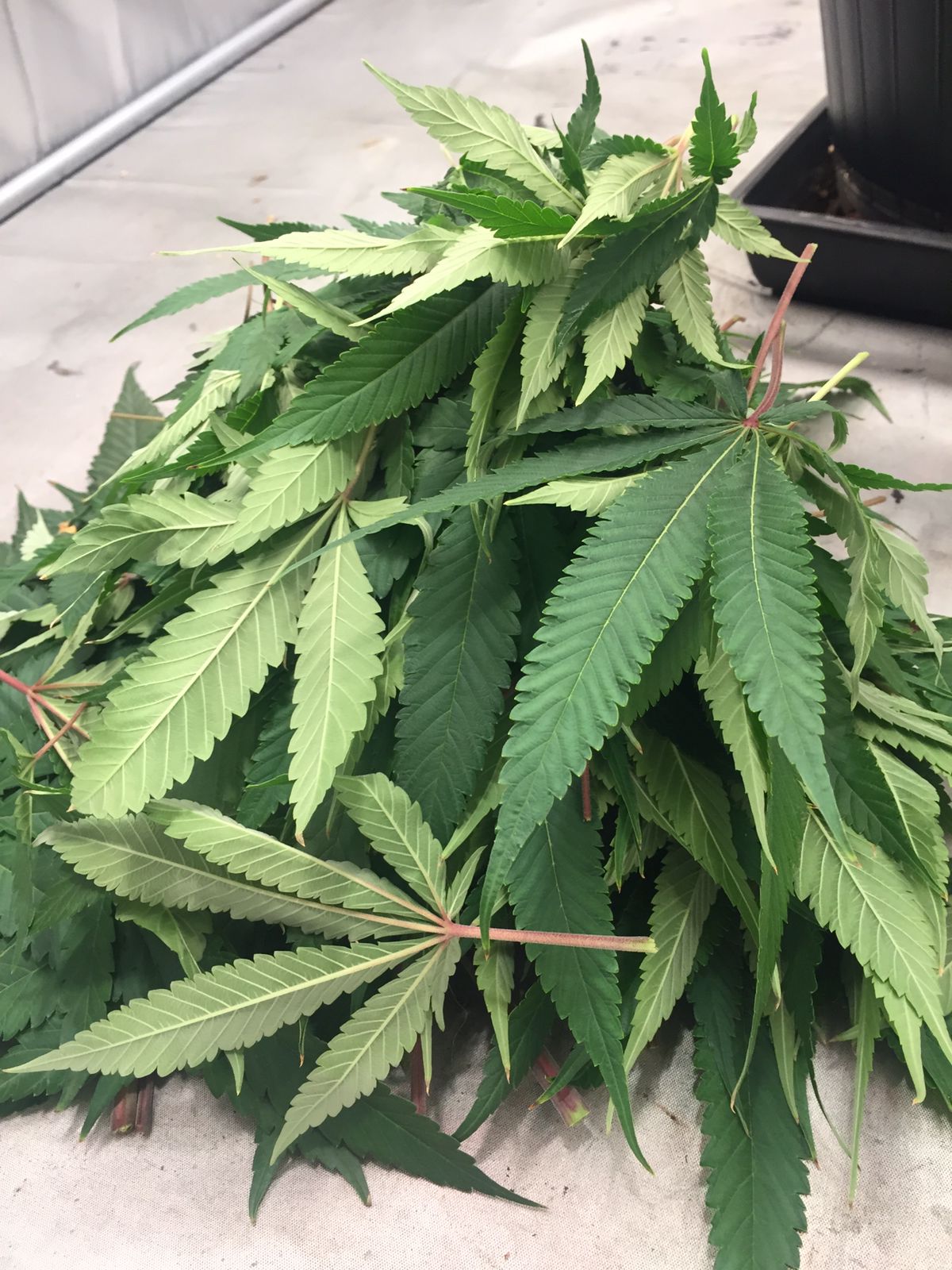 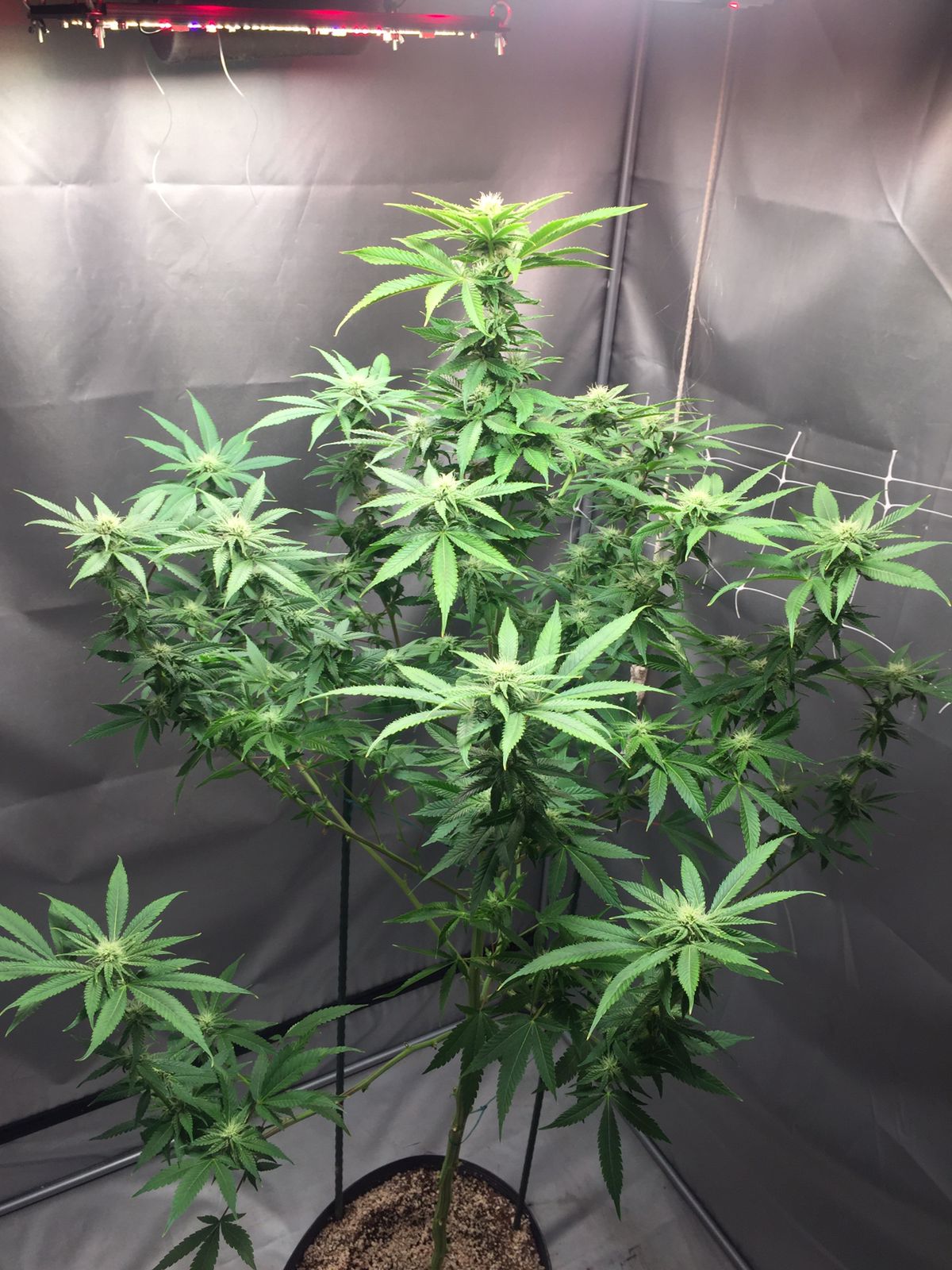 Do not defoliate in excess, the plant needs the leaves to carry out photosynthesis and obtain part of its food to thrive and grow. In addition, leaves can be stores of nutrients and you may need them if there is a deficiency or excess. 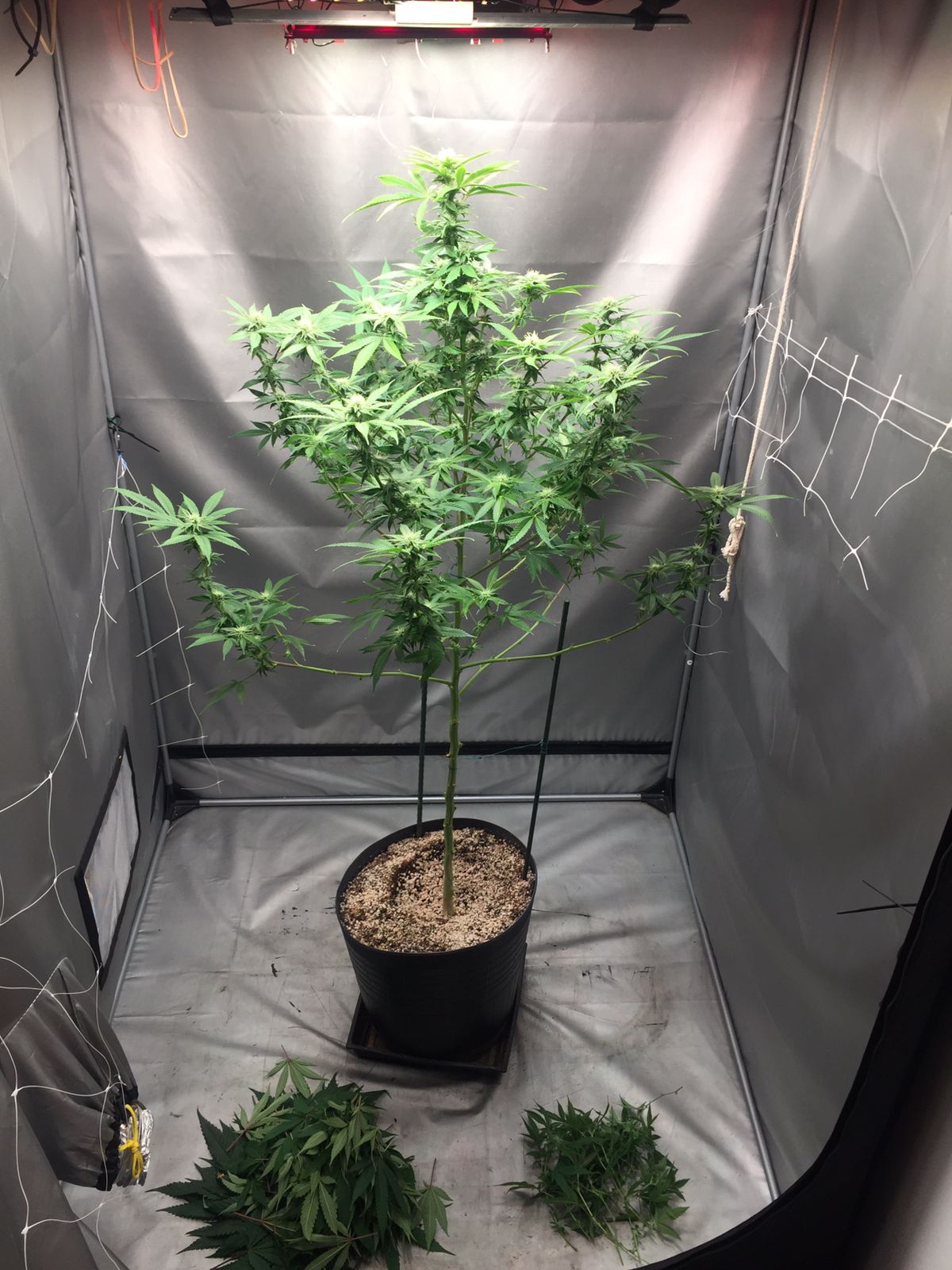 For automatic plants, defoliation in the vegetative can also be done. You can remove some leaves that are covering up potential buds or that are making the area of the plant too big. And remember, less is more.

We have seen that the defoliation, in the vegetative, can be done in a calm and balanced way. In flowering, it is practically the same thing, you will observe your plant and check if it should be defoliated or not. Pruning and defoliating plants in indoor cultivation during flora can bring benefits!

First, make sure your plants are very dense, with leaves very close to the buds and need a space for the wind to circulate better and the light to penetrate more deeply. Buttons cannot be glued together, they need space between them too.

A plant with few leaves, either due to genetic factors or previous defoliation, should not be disturbed! Defoliating too much, or defoliating a plant that is not mature enough, can stunt growth and cause a considerable loss in yields. 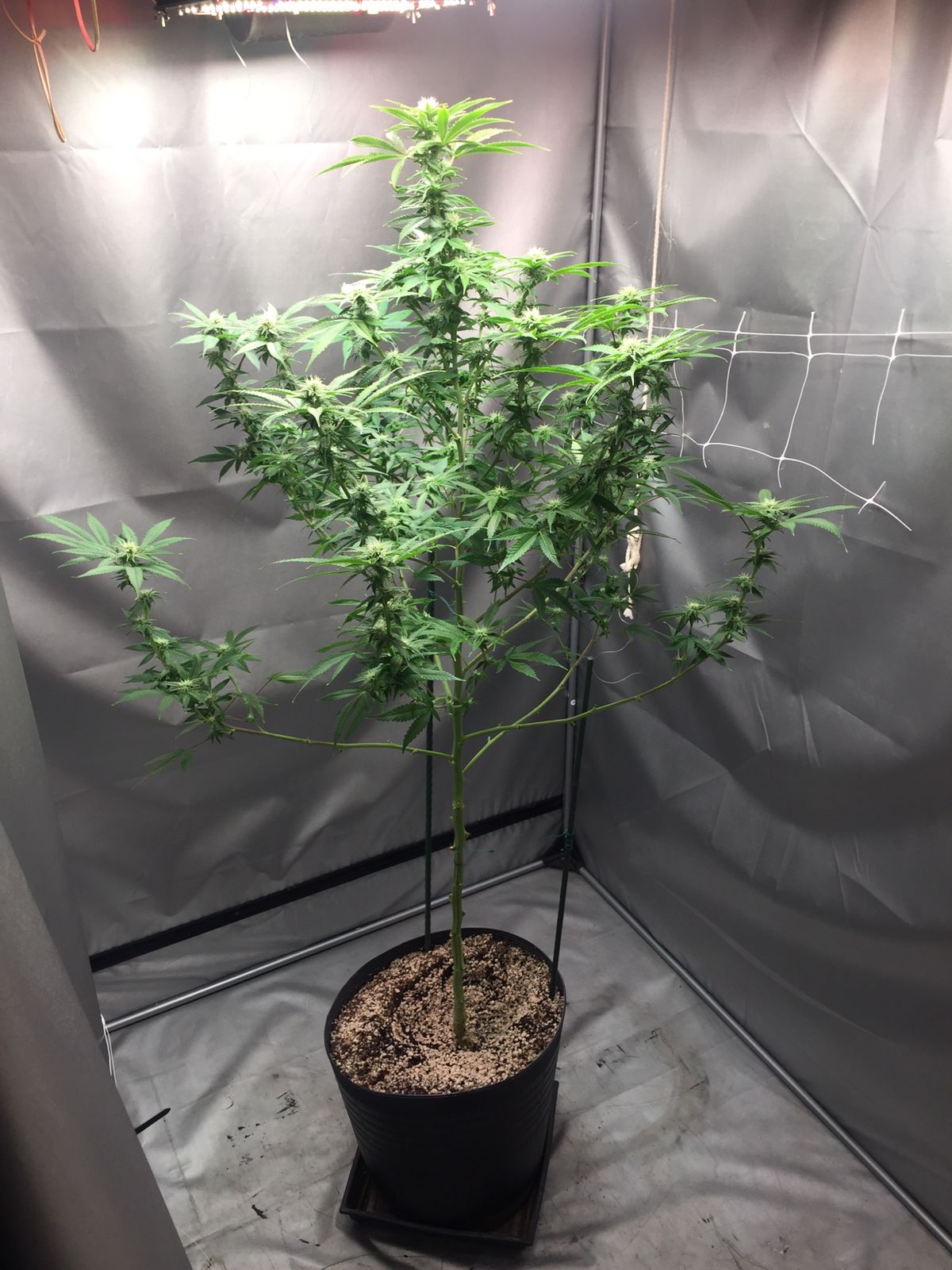 Is your plant at the beginning of flowering? In the middle? Pruning can be done, in a balanced way, up to a certain point in the life stage of the plant. Normally, until the sixth week of flowering (beginning of fattening for photoperiods. Automatic can be earlier), we have the possibility of defoliating a plant, as there is still the appearance of new leaves.

A pruning schedule will help when defoliating, you will need to check the plant and determine how much defoliation will be.

Remember, the plant needs the leaves to carry out photosynthesis, so make a conscious defoliation. In addition, you can remove some leaves from the plant and come back a few days later to see if it needs to be pruned again.

A widely used schedule is pruning after the first week of flora; does it again after the third or fourth week of flora (more intense); and a last one in the sixth week (removing few leaves that were left over or grew on the shoots). 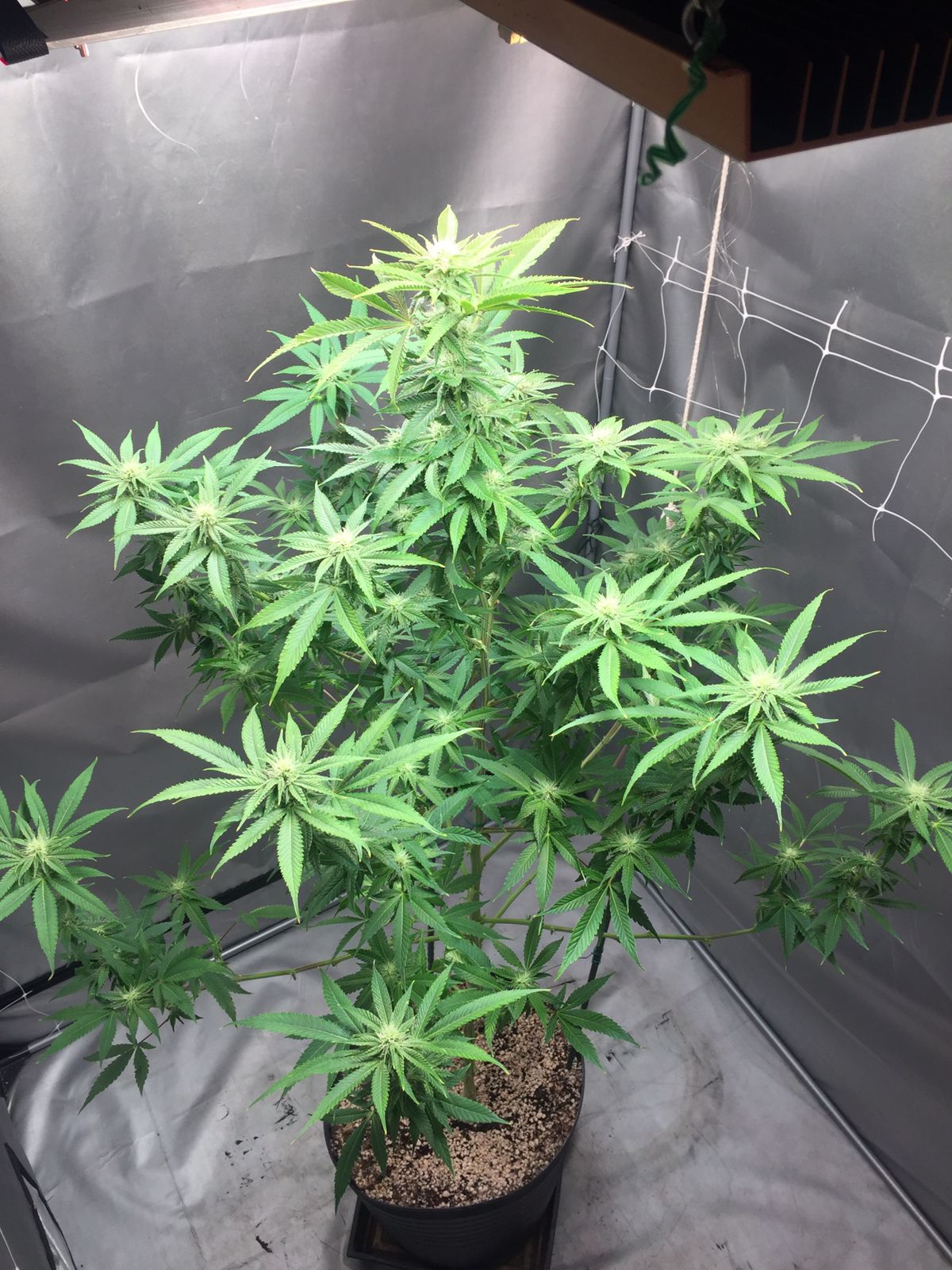 Start with the fan leaves

Fan leaves are the largest leaves of Cannabis, the ones that appear during the vegetative period and at the beginning of flowering. Remove leaves that are very large, have very long stems, or have an area that covers the shoots you are interested in keeping.

If you have a very high amount of leaves and they are touching, you can also free this area, preventing moisture accumulation and, consequently, mold.

Very important! When removing a leaf, try to loosen the stem from the bud, this is the cleanest way to defoliate. If not, you can do it with sharp, clean scissors. When cutting a leaf, avoid removing the smaller shoots, which will turn into flowers. 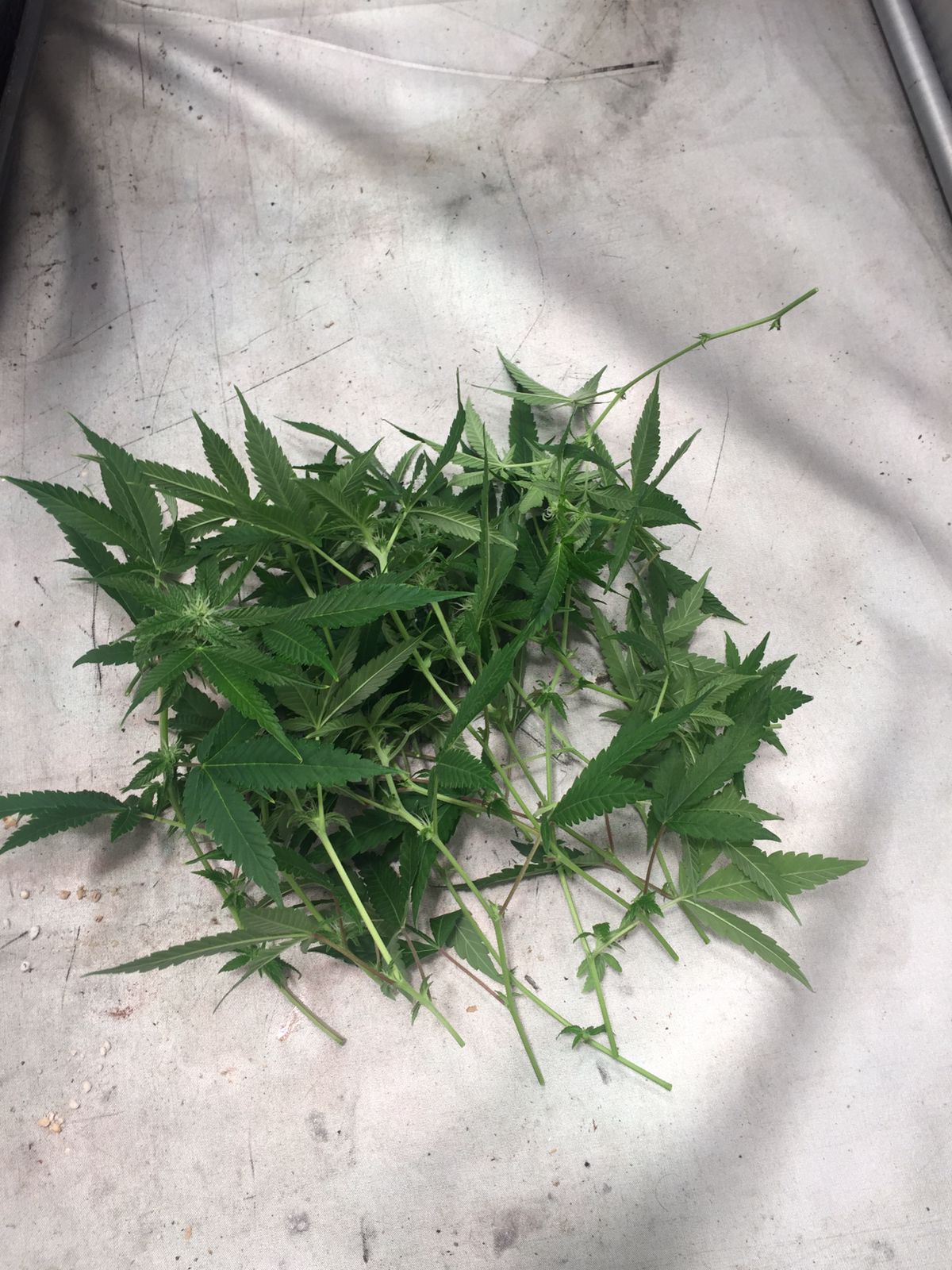 Removing shoots seems like a complicated task, but if done correctly, it won't harm the plants.

Identify shoots that are far from the top, that are starting to space out too far, or that have low growth and cut them.

These buds are most visible in the third to fourth week of flowering, but a technique called "lolly popping" involves cleaning the bottom of the plant at the end of the vegetative or first week of flowering, concentrating the growth on the upper buds only. 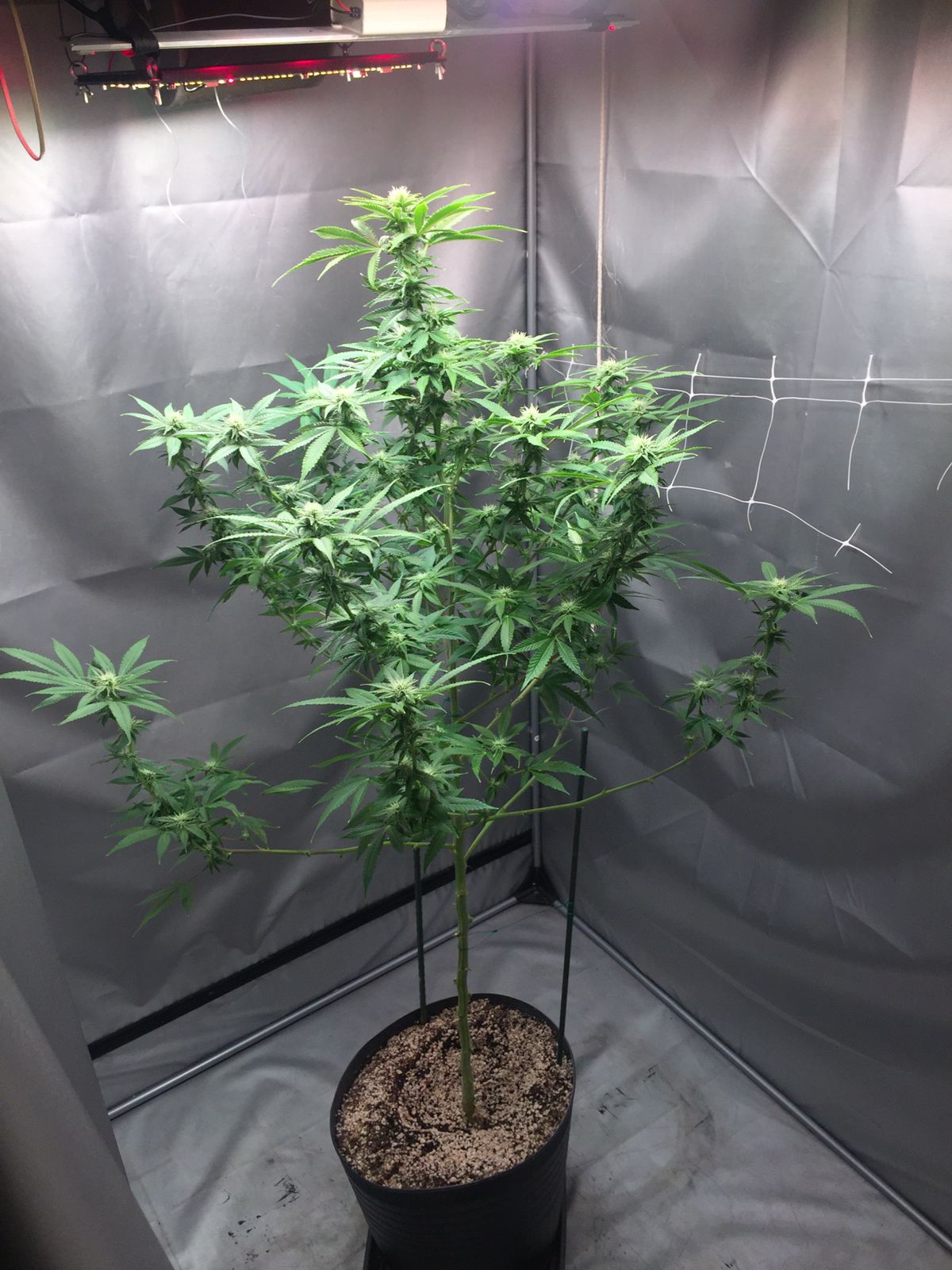 If done correctly, the plant will recover and in a few days show signs that the defoliation was positive.

Remove the larger fan leaves, free up space on the plant so the wind circulates more and the light can penetrate more deeply. When removing the energy-sucking shoots, try to do so on the lowest ones that don't have enough elongation to be close to the plant's crown.

"Greater penetration of light: Light will be able to penetrate deeper into the plant, reaching more buds and causing them to develop more."

will this also work on normal plants? I'll try that if it does.

Welcome and thanks for the compliment. I believe it is valid for any type of plant, yes, it removes older leaves and small shoots that strengthens development and directs energy to other parts of the plant. soon I'll bring more news =) posting and learning how the network works around here =)

Awesome post full of so much great info. Defoliation is such an important part of growing that so many people tend to either ignore or mess up.

Awesome post full of so much great info. Defoliation is such an important part of growing that so many people tend to either ignore or mess up.

Welcome master! thank you so much. Many people disregard exfoliation. but I see a lot that performing it, in addition to the benefits I mentioned, I believe that we managed to remove a large part of the nutrients parked in the plant, which often leaves that dark gray when we smoke. More news coming soon =)
happy to have pleased.

Congratulations @don8bit! You have completed the following achievement on the Hive blockchain and have been rewarded with new badge(s):

Excellent write up ! You explained this process perfect. Another great reason to make sure you always have leaves near bud sites, is to make sure the plant can still talk to you, and let you know what’s going on.

Wow, how cool! I think this tuning is great. see you there on the other side of the net with similar thoughts =) congratulations! very happy with the community around here =)

What are you gonna do with those leaves that you removed? In the country where I live the leaves are the main product. They would dry and compact the leaves into bricks and sell them for a fortune. 🙂

Good question =)
I put the fresh leaves in the freezer and I'm going to prepare Bhang.
Bhang is an edible preparation made from the leaves of the cannabis plant originating from the Indian subcontinent. It has been used in food and drink as early as 1000 BC in ancient India.
Soon I will make a post about Bhang for you =)

Ohh that's wonderful. Don't forget to ping me so that I will not miss it.
I see some making a compost out of their trimmings so I guessed that you will do the same. 🙂

Hey King ! There is a lot of discussion around whether or not to remove leaves and shoots. I have already carried out tests with plants and realized that in my case the removal works well because my tents are small and at the end of flowering with many leaves the humidity increases a lot bringing mold on the flowers. but this is my case. =)

yes that work in your case and you need a plant a that give all the energy to the buds :D