My entry in the 5 gallon challenge Been a long road for this plant

The @canna-curate and Weedcash community has a 5 Gallon Challenge where you have to grow a cannabis plant in a 5 gallon container and see who gets the most yield from it. It is a pretty fun challenge and a great way to get some competition going between the members of the community. These buds have been drying upside down over the past few days and they look awesome. I already had some buds from this plant that I have dried and started the curing process. The buds in the first image that are not on branches anymore are the first set of buds that I harvested and have begun curing. The buds from the main cola weighed in at 9.43 grams. Not too shabby for one chunk of the harvest. Overall, the total I was able to get is 46.6 grams. It is actually about 5 grams more because I gave some of it to a friend for them to test out, but everything I have left of the plant is 46.6 grams. This plant had a rough start the beginning, but it was one of the best plants I have had to learn with. It was my first plant that I had originally planted in a 3 gallon pot because I had read that a plant needs 1 gallon per month that it is going to be alive, but I didn't take into account that cannabis is such a fast growing plant and once it entered the flowering phase, it became root bound and I needed to transplant it to the 5 gallon container, which gave it plenty of room to grow into. This is also the one that I snapped the stem when I was bending it. I learned some new techniques to properly bend the stems and branches, which have significantly increased the plants health and bud sizes. Growing cannabis has become such a fun hobby and I have been learning so much from each grow that I have done. Over the past couple weeks, my wife and I were preparing to move and I threw out the Big Mac plants that I was growing because I would not be here long enough to finish them and crossing state lines with live cannabis plants probably isn't the greatest idea. Also trying to sell a home and show it to potential buyers with a full grow tent probably isn't the greatest idea either. Well long story short, things did not work out for us to move quite yet, so I threw out the Big Mac plants for nothing. It is ok though because last night I started to germinate some new seeds that I will be planting. I have two Sour Kush and two Pineapple Express seeds that will be ready tomorrow. I've also got some 5 gallon Air-Pots coming and they should be delivered tomorrow. I have begun a new technique of starting my seedlings in a small container, on a heating pad to increase root growth, and under a smaller light before I move them into my tent with the other plants. This worked very well for the Big Mac plants and they were all doing awesome before I got rid of them.

The Air-Pots are supposed to be amazing to grow in because they increase oxygen down into the roots. I've also got some Scrog netting that I will be using as well. I am really looking forward to these next plants because there are so many new things I will be trying with them. Hopefully the 46.6 grams that I got from this Bubblegum is going to be nothing compared to what my future grows are going to be.

Well, that will do it for this post. I am glad that this plant didn't die off because of the health issues it had. I can't wait to try this strain out in a couple months once it is further into the curing process. Thanks for stopping by, you are awesome.

Thanks man. Hopefully they cure nicely and have some pretty good effects. I have two more bubble gum plants, so I should get near 100 grams or more from them. Gonna add a lot to the stash I have going.

Congrats bro! 420 weed sent for you taking the top spot.

Thanks man. I am going to have to think of a contest for the canna community and use that 420 Weed tokens as a prize. 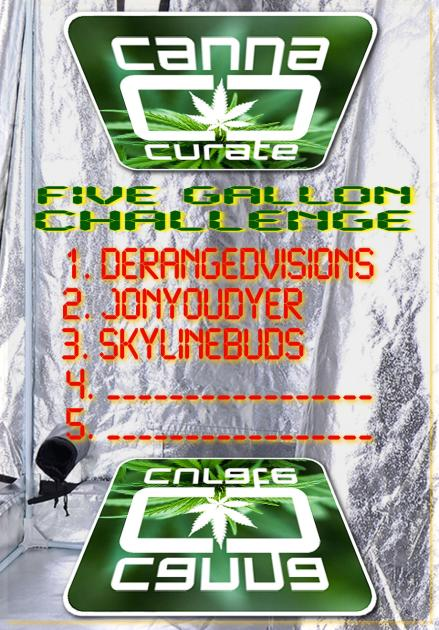 Your work is impressive you deserve more 🤗

Is there a rule in the competition that you cant add raw sugars into the water during flush?

Nah, only rule is to grow in a 5 gallon container, any medium.

Awesome harvest. It's amazing how breaking a branch can really help a plant out

Ya. It is backwards thinking to do it but when you think about why, it makes total sense. My next grow, I am going to be chopping the main stem totally off. That will be interesting to see how things go from there.

You should try multiple 5-gallon containers and see how much you can maximize your yield.

I have several plants in 5 gallon containers right now. This one was just the recent one I harvested.

Oh, that's pretty epic! What was the largest yield so far?

Wow a lot to know about weed growing.. not like the weeds in my lawn.. ha ha )) My state, NY is going legal .. would not mind trying to grow some myself.. Is there a web site to buy seeds? There are a lot of different places you can order seeds. I usually order mine from here because you can pay in crypto.

Thanks .. lot to know getting before getting to the consuming part.. That was the only part I use to know .. ha ha..thanks @derangedvisions

all the best in the challenge.
will support your work each and every step.
hive on.
lets push weedcash network to the moon 🌝
!BEER
!PIZZA

@derangedvisions! I sent you a slice of $PIZZA on behalf of @tonytrillions.

Hey @derangedvisions, here is a little bit of BEER from @tonytrillions for you. Enjoy it!

A PITY a day makes your self esteem go away